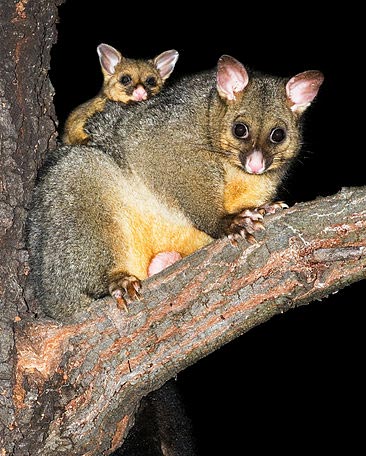 The common brushtail possum has large and pointed ears. It has a bushy tail (hence its name) that is adapted to grasping branches, prehensile at the end with a hairless ventral patch. Its forefeet have sharp claws and the first toe of each hind foot is clawless but has a strong grasp. The possum grooms itself with the third and fourth toes which are fused together. It has a thick and woolly pelage that varies in colour depending on the subspecies. Colour patterns tend to be silver-gray, brown, black, red or cream. The ventral areas are typically lighter and the tail is usually brown or black. The muzzle is marked with dark patches.

The common brushtail possum has a head and body length of 32–58 cm with a tail length of 24–40 cm. It weighs 1.2-4.5 kg. Males are generally larger than females. In addition, the coat of the male tends to be reddish at the shoulders. As with most marsupials, the female brushtail possum has a forward-opening, well-developed pouch. The chest of both sexes has a scent gland that emits a reddish secretion which stains that fur around it. It marks its territory with these secretions. [credits: Wikipedia]