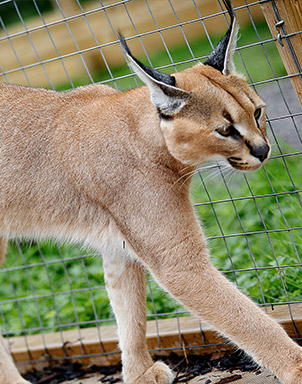 The caracal is a medium-sized wild cat that lives in Africa, the Middle East, Persia and the Indian subcontinent. It reaches 40–50 centimetres (16–20 in) at the shoulder, and weighs 8–18 kilograms (18–40 lb). The coat is uniformly reddish tan or sandy, while the ventral parts are lighter with small reddish markings. The caracal is characterised by a robust build, long legs, a short face, long tufted ears, and long canine teeth. It was first described by German naturalist Johann Christian Daniel von Schreber in 1777. Eight subspecies are recognised. [credits: Wikipedia]