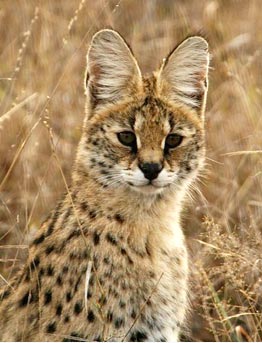 The serval /ˈsɜːrvəl/ (Leptailurus serval), also known as the tierboskat, is a wild cat found in Africa. The sole member of the genus Leptailurus, it was first described by German naturalist Johann Christian Daniel von Schreber in 1776. Eighteen subspecies are recognised. The serval is a slender, medium-sized cat that stands 54–62 centimetres (21–24 in) at the shoulder and weighs 8–18 kilograms (18–40 lb). It is characterised by a small head, large ears, a golden-yellow to buff coat spotted and striped with black, and a short, black-tipped tail. The serval has the longest legs of any cat relative to its body size. [credits: Wikipedia]