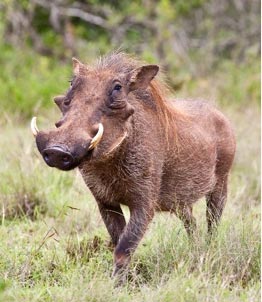 Phacochoerus is a genus of wild pigs in the family Suidae, known as warthogs. It is the sole genus of subfamily Phacochoerinae. They are found in open and semiopen habitats, even in quite arid regions, in sub-Saharan Africa. The two species were formerly considered conspecific under the scientific name Phacochoerus aethiopicus, but today this is limited to the desert warthog, while the best-known and most widespread species, the common warthog (or simply warthog) is Phacochoerus africanus. [credits: Wikipedia]